Belt Up Baby has been tested at TRL, the UK Transport Research Laboratory. The speed and crash pulse for the crash tests were the same as those used in R44 or R129 Standard CRS tests, used for standard child car seats. The first test (Configuration 1) used a restrained adult dummy holding a child P1.5 dummy (12kg) on its lap unrestrained. The second series of tests (Configuration 2) were carried out using Belt Up Baby to restrain the P1.5 dummy on the adult’s lap.

The summary from the TRL report states that “the unrestrained P1.5 child dummy in this test (Configuration 1) sustained massive head acceleration, HIC and chest acceleration. The head acceleration and HIC almost certainly would be fatal”. The second series of tests (Configuration 2) using Belt Up Baby show much lower results all within the (R44 or R129) regulation and therefore would decrease the risk of injury. As stated in the TRL summary, the measurements from the restrained P1.5 dummy (Configuration 2) “were comparable with similar measurements from child restraint system tests”. 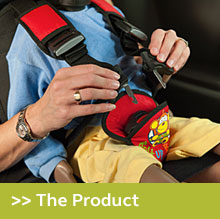